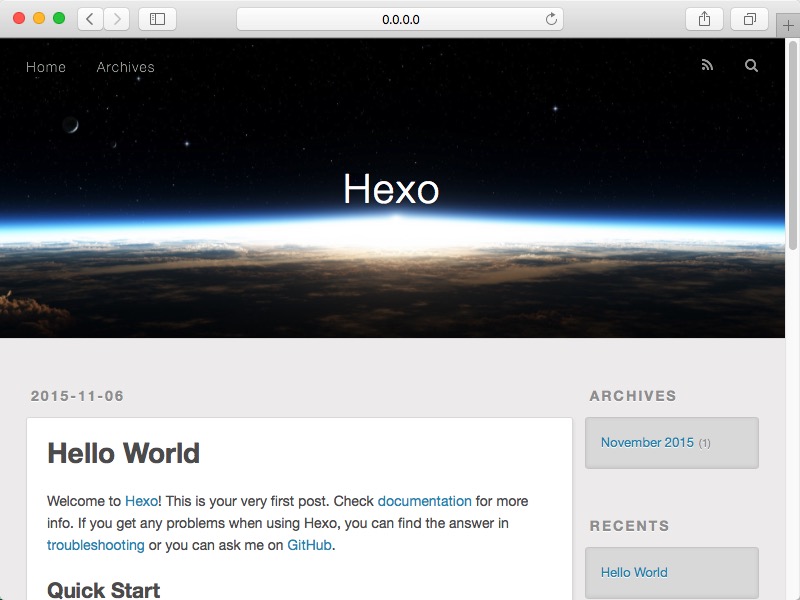 Notes On Creating A Hexo Theme

In 2015 it makes sense to use NVM. NVM Installation
Instructions.

Hexo: why can’t you use helper functions in source code?
This should be in docs.

Trying to generate a custom index file in source, hexo would ignore
source/index.md no matter what I did. What I had to do was uninstall
hexo-generator-index. See
here. Then it works. So, that
will be part of the setup for my theme. But, it’s worth it in order to properly
seperate the theme from the content, I think. Having everyone edit the theme
index.ejs template is no good.

Sometimes the server would keep rendering an old version of my code, but as
text. So I’d see stuff like

The raw ejs, essentially. Restarting the server or running hexo clean didn’t
do anything.

After some time, I realized it was due to the gedit swap files being read by
hexo as the actual layout files: for example, tag.ejs~. My partial helpers
looked like: <%- partial('_partials/tag') %>, and apparently hexo was reading
in tag.ejs~ instead of tag.ejs. And therefore, the ejs wasn’t rendering.

To fix this, I simply changed my partial helper to <%- partial('_partials/tag.ejs') %>. Problem solved.

I was confused by the behavior of the hexo excerpt variable. If you define
excerpt: something in the front matter, hexo ignores that. Instead, to get it
to work, one needs to add a <!-- more --> comment in the source of the post.
Or, you can install a plugin that allows you to define custom excerpt in the
front matter.

One of the things I really discovered too late is the “Scripts” directory in the
theme folder. In Hexo, the various plugins drive the structure of the site, as
opposed to the placement of different files and directories, as in Jekyll. The
plugins programatically create folder structure, etc, where in Jekyll I mostly
used the liquid markup to structure the site.

The problem is, then, that the user wants to extend hexo to do some sort of
custom thing. If one had to publish a new plugin, that’d be too much work. But
the theme level scripts folder allows one to extend the base hexo functionality
in ‘user space’ effectively.

EMS bus How to connect

You need to set client_id and slot_id to show this AD unit. Please set it in _config.yml.
×